An Ideal Yatra to Soulful Seoul

on May 15, 2016
Seoul, a city that never sleeps, is the largest metropolitan in the heart of South Korea with a domicile of over 10 million people. Surrounded by nature and steeped in history, this Miracle on the Han River offers amazing panoramic views. 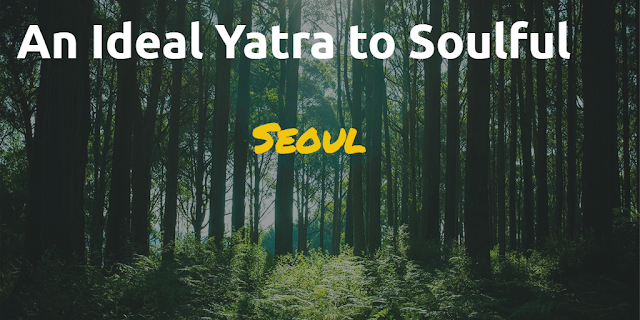 Hailed as the #1 party city of the world, Seoul is a contemporary melange of glitzy nightlife, pulsating K-pop, unique cat cafes, and antiquity – totally worth your admiration!

The Incheon International Airport has an annual capacity of 410,000 international flights and 44,000,000 passengers. Rated as the world’s best airport for nine years in a row, it welcomes you to the most wired city, Seoul, which is also home to the fastest Internet speed.

There’s a unique mysticism about Seoul that attracts you from the word go. Few could have imagined the contemporary Seoul as we know today was at the verge of destruction during the Korean War. Its resurgence is symbolic in many ways!

Seoul might seem intimidating at first but is in fact truly a place to explore. A stopover at any one of the five UNESCO world heritage sites in Seoul* is a good starting point to know the capital city more intimately, and is bound to transport you back in both time and space.

Begin your voyage to the world’s fifth largest city by arriving at the Central Seoul, the focal point for all prime attractions. A good start is to explore the majestic cultural heritage of the Royal Joseon dynasty, by visiting the landscaped grounds of the Gyeongbokgung and Changdeokgung Grand Palaces.

In close vicinity of these palaces stand the beautiful Namsangol Hanok Village. Koreans’ love for their culture and traditions in this mock rural set up will amaze you – with ancient houses, folk materials, wedding culture, and much more.

Capture the scintillating view of the city’s grandiose layout by taking an exciting cable-car ride up to the iconic N Seoul Tower on the Namsan Mountain.

Declare your love on top of the world by placing a padlock with your sweethearts’ name or initials inscribed on it. Then head for a delightful night-excursion by boarding a cruise to see the most spectacular sights of the Han River.

Another overwhelming halt is a must-watch show of the world’s longest bridge fountains at the Banpo Bridge.

In between the sight-seeing, savor the world’s most flavorful food, like the most desired Korean BBQ gourmet Sannakji, signature dishes – Bibimbap, Kimchi, or my favorite croquettes, no food is complete without the popular Soju – giving you a high to set your foot tapping at the K-style pubs in Hongdae, Itaewon, or Apgujeong.

Go On A Shopping Spree

Tick an array of items from your bucket list by traversing the busy streets of Insadong or Myeongdong. Hop in the largest traditional market of Korea – Namdaemun – famous for budget shopping.

Shop like crazy all night long at Dongdaemun. If tech-toys make you happy, then Yongsan Electronics Market is your stop. You may find the latest gadgets that have not even been introduced elsewhere in the world.