Top Offbeat Destinations in Madhya Pradesh to Satiate Your Wanderlust

on February 10, 2020
In this blog post, I cover the top offbeat destinations in Madhya Pradesh to satiate your wanderlust. 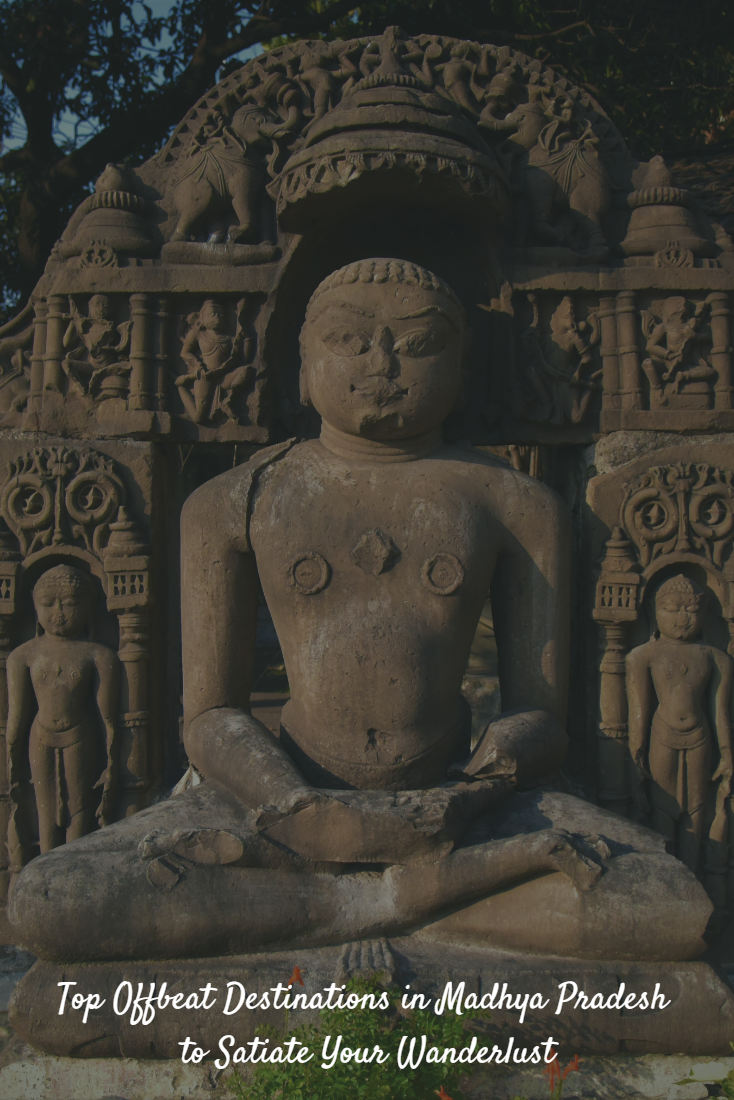 The new year started on a fantastic note for me. First, my name was listed as one of the nominees for Best Blogger at the SATTE Awards 2020. It was my second nomination, that too in a row. And even though I did not win, merely seeing my name appear on the big screen in front of the who's who of the travel, tourism, and hospitality industry was so freakin' awesome!

Post SATTE, I was inundated with inquiries and requests for my blog media kit. One invite, in particular, stood out from the rest. The Madhya Pradesh Tourism Board was requesting my participation in their first media familiarization tour of 2020.

The three nights and four days FAM commenced from Delhi on January 30. As part of my itinerary, I was required to visit five cities in Madhya Pradesh - Indore, Omkareshwar, Hanuwantiya, Maheshwar, and Mandu.


Through this post, I give you a rundown on each of these cities, with top offbeat destinations to satiate your wanderlust.

Did you know that Indore is the birthplace of superstar Salman Khan and legendary cricketer Rahul Dravid? Or that the International Indian Film Academy (IIFA) Awards 2020 will be held in Indore in March this year in association with the Madhya Pradesh government?


The largest city in the state of Madhya Pradesh is also India's cleanest. It was inspiring to learn how the city has resolved nearly 90% of its solid waste challenge. The success of Indore should be used as a boilerplate to address India's trash emergency.

To explore Indore's signature cuisine in its entirety, Sarafa Bazaar is perhaps an excellent place to start. A quaint jewelry marketplace at daytime which converts into a bustling street food court every night. Sarafa is the kind of place you'd love to go with friends or family to cherish veggie delights indigenous to Indore.

And while you're at it, make sure to stop by the most famous street food vendors in Indore like the Joshi Dahi Bada House, Vijay Chaat House, Nagori ki Shikanji, Rajhans ka Daal Bafla, and Kamal Coconut Crush.


The late-night street food market is open daily until the wee hours of the morning and is considered entirely safe for visitors. It attracts nearly 3000 visitors every day, comprising both locals and tourists.


You're more likely to eat to your heart's content here. Forget calories or diet and simply have the time of your life at this celebrated foodie landmark of the city of Indore. It's undoubtedly a once-in-a-lifetime gastronomical experience!

Considered one of the city's choicest street food hubs, Chhappan Dukaan is known for specials, chaats, idli, and dosa, served with equal gusto. The evenings light up this place like no other, with people consuming the delectable spread with childlike enthusiasm.

I stopped here to try the famed Tandoori Chai, made by placing an earthen cup in a glowing hot tandoor. When the container becomes super hot, it is taken out using an iron tong, and sweet milky chai is poured in which sizzles and froths over. Then this chai is served in a kulhad for consumption.


I genuinely enjoyed the process of making the chai; it was two-minute of sheer theatrical magic!

Although Indore is widely known for its numerous Maratha era architectural marvels, there are a few hidden gems the world needs to know of!

Kanch Mandir (A.k.a. The Temple of Glass)

As the name suggests, Kanch Mandir is a Jain temple made entirely out of glass and mirrors. It is unlike any other tourist attraction you will find in Indore. An actual place of worship for the Jains, the Kanch Mandir is hailed for its exquisitely designed walls, ceilings, floors, pillars, and doors - all of which are made of glass.


The Chinese glass lamps and cut glass chandeliers are simply alluring. Don't forget to check out the idol of Lord Mahavira made of black onyx and decorated with multicolored glass beads. With 50 glass murals depicting the various stories of Jainism, this temple is an absolute must-visit, just for its sheer beauty.

Ready to seek blessings from the biggest Ganpati statue in the world? Measuring eight meters in length, the Bada Ganpati is made of a unique mixture comprising limestone, jaggery, bricks, and holy soil and water from major pilgrimages in the country.

Hailed as one of the most potent shrines of the Lord Ganesha, the Khajrana Temple was built by Maharani Devi Ahilya Bai Holkar to safeguard the idol of Lord Ganesha from Aurangzeb.

The temple - with its large inner and outer sanctums - is frequented by the locals, especially during the 10-day annual festival of Ganesh Chaturthi/Vinayaka Chavithi.

Did you know that the sacred island of Omkareshwar is shaped like the Om - the holiest of all Hindu symbols? Located at the confluence of the rivers Narmada and Kaveri, Omkareshwar is revered for one of the 12 Jyotirlinga shrines of Shiva inside the temple of Shri Omkar Mandhata.


By a stroke of luck, I reached the Shri Omkareshwar Jyotirlinga Temple on the auspicious day of Amavasya, a day not to indulge in carnal or material pleasures but to devote on spiritual matters only.

Several devouts from all over the country gather here every year to kneel before the Jyotirlinga and pray, followed by a holy dip in the serene Narmada river.

The beauty of Omkareshwar is further accentuated by the lofty hills between which the river Narmada forms a serene pool. Above this pool runs a 270 ft. Cantilever type bridge called the Hanging Bridge.


A boat ride is highly recommended at Omkareshwar, a city blessed by Gods and adorned by nature.

For the uninitiated, the Hindi word 'Maheshwar' means 'Great God' - an epithet of Lord Shiva.

Built on the banks of river Narmada, Maheshwar will bring out the pilgrim as well as the tourist in you. Only a few people know that Maheshwar was once a glorious city at the beginning of Indian civilization. In those days, it was called Mahishmati, the capital of King Kartavirya Arjuna (a.k.a. Shastrarjun).


If you have read the Sanskrit epics Ramayana and Mahabharata, you can also find several mentions of this ancient temple town.


With its treasure trove of beautiful temples and man-made creations, Maheshwar will calm your mind and soul.


Here's another interesting piece of trivia about Maheshwar. Several popular Bollywood movies have been shot in Maheshwar, the more recent ones being Ashoka, Bajirao Mastani, Neerja, Pad Man, Kalank, and Dabangg 3.

Maheshwar was revived to its ancient position of importance in the late 18th century by the Holkar queen, Rani Ahilya Bai of Indore, who largely remains an unsung hero. She embellished the city with a fort and many buildings, temples, and riverfront ghats. The town still holds the distinction of being the capital of Rani Ahilya Bai's empire during the 18th century.

To date, Rani Ahilya Bai is remembered in the region for her public work. Enter the mighty Ahilya Bai Fort and Palace complex, which stands in quiet beauty today. The first thing you'll notice is a life-size statue of the pious and wise queen.


If you have some time in hand, make sure to explore other fascinating relics and heirlooms of the Holkar dynasty.

A center of handloom weaving since the 5th century, Maheshwar is home to the unique and beautiful handwoven Maheshwari sarees and fabric. These colorful cotton sarees are weaved with distinctive designs, involving stripes, checks, and floral borders.


Any trip to Maheshwar would remain incomplete without a visit to the Rehwa Society, an NGO founded by the Holkars in 1979, which has taken the responsibility to save the local handloom industry in Maheshwar.

By employing local women and men, this NGO has revived the town's textiles.


The weaving center of Rehwa Society is located in one of Maheshwar's most historic buildings. More than 100 weavers associated with the society produce over 100,000 meters of delicate Maheshwari fabrics a year. Rehwa Society also provides free schooling for weavers' children and runs a low-cost health scheme.

My final abode in Madhya Pradesh was also the one I had meant to visit for a very long time. Mandu is not just an ancient city existing since the sixth century B.C. but the only place that houses India's biggest fort - The Mandu Fort ... bet you didn't know about that! Mandu also shelters the monument that inspired the iconic Taj Mahal.


Mandu's love story begins with the tale of the legendary romance between Rani Roopmati and Prince Baz Bahadur.


A silent witness to Mandu's long, vibrant, and varied history is the grand palaces that live to tell the tales of royal romance. Much like the Darwazas or gateways, which bear testimony to imperial conquests and wars.

Cross a narrow strip of land between Munja and Kapur Tanks to reach Jahaz Mahal, the brainchild of Sultan Ghiyas-ud-din Khilji. Floating over its own reflection, the Jahaz Mahal resembles a ship that's just about to sail.


Built between two artificial lakes, this two-storied architectural marvel served as a harem for the Sultan.

If history is to be believed, this massive sandstone structure was erected because Rani Roopmati had caught the interest of Baz Bahadur, the last Sultan of Malwa.


It was on one of his hunting excursions that Baz heard Roopwati (1555-1561 C.E.) sing. The melodic voice of Roopmati, then a simple Hindu peasant girl, cast a magical spell on the Malwa prince. Baz requested Roopmati - who was already married at that time - to move to Mandu.

Rani Roopmati Pavilion bears witness to the incomplete and tragic love story between the beautiful queen and the Malwa prince. It is believed that Rani used to view her paramour's palace as well as the flowing Narmada from this pavilion.

Adham Khan, a general of Mughal Emperor Akbar, was also attracted by the beauty of Roopmati. However, before he could make his intentions obvious, the queen died a self-inflicted slow poisoned death, unable to bear the mental trauma.

Situated below Rani Roopmati's Pavilion is the Baz Bahadur Palace, which can also be viewed from the pavilion.


Legend has it that this beautiful architectural wonder was built for the last independent ruler of Mandu, Baz Bahadur, much before he came into power in 1509.

This 16th-century structure is hailed for its large courtyards, surrounded by huge halls and high terraces.

The Hindola Mahal derives its name from the inclined ramparts that are supposed to create the impression they are swinging.

If you are mesmerized by the beauty of the Taj Mahal, let me tell you it wasn't the first marble structure built in India. Hoshang's Tomb is regarded as the oldest marble edifice, one of the most refined examples of Afghan architecture.


Built by Hoshangshah Gori (1406-1435 C.E.), this architectural phenomenon is said to have influenced Shah Jahan so much that it served as a perfect template for the construction of the Taj Mahal.

I was dumbstruck with utter admiration, just looking at the beautifully proportioned dome, intricate marble latticework, and porticoed courts and towers.


Very few states in India can match Madhya Pradesh in terms of its sheer diversity and rich heritage, not to forget its breathtaking scenic beauty, traditional pilgrimages, and unparalleled national parks and wildlife sanctuaries. With three World Heritage sites (Sanchi, Khajuraho, and Bhimbetka) already attracting tourists from all over the world, the Tiger State is unarguably the heart of Incredible India.