on October 16, 2017
Have you ever been to a summit which sparks your imagination, inspires empathy, celebrates art, culture, and history, bridges the familiar with the unfamiliar, promotes business ideas, empowers knowledge, and enlivens young intellectual minds? Basically, a summit that encourages you to think for a ‘Better India, Better Future’. 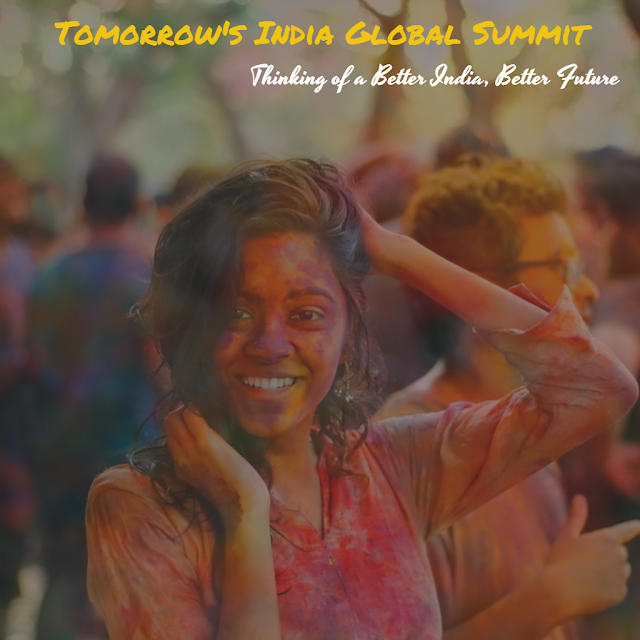 The third edition of Tomorrow's India Global Summit in New Delhi brought together likeminded folks from different walks of life on a common platform, with the intent to dialogue and discuss 20 key issues of national interest that would help to engage and drive change for a better tomorrow. The first of its kind event took place on Sunday, October 8, 2017, at Siri Fort Auditorium in Delhi from 10 A.M. to 10 P.M.


Tomorrow's India is managed by Global Social (India) Foundation, a not-for-profit company. Incorporated on August 24, 2015, it is classified as an Indian non-government company, registered with the Registrar of Companies, Delhi.


This year, the one-day global summit was graced by 40 experts from the fields of economy, science and technology, cinema, human rights, law, sports and culture, journalism, food, farming, philanthropy, and so on.

The opening ceremony was marked by a fitting tribute to India, through the depiction of Vande Mataram by Sarvam Patel, a sand artist. India is the largest democracy in the world today with a seamless picture of unity in diversity unparalleled anywhere else.


The grand event was inaugurated with the auspicious lighting of the lamp and few words of appreciation by Satyadev Pachauri, an Indian politician, and Minister of Khadi, Village Industries, Sericulture, Textile, Micro, Small & Medium Enterprises and Export Promotion in the Government of Uttar Pradesh.


Among the other eminent speakers were:


"Though a leader can make a big difference, the real strength of a society lies in its institutions. The institutions which are formed by its people, who are willing to lead a change. The role of the state in people's lives should be reduced, so that the innate creativity of the people is enhanced." - Arun Shourie

"Embracing the Indian in you will help build a better Tomorrow's India." - Chetan Bhagat

"If you respect nature, nature will respect you. It's that simple." - Tensing Bodosa

"Comic Con India is a passion driven event. It's not only restricted to comics but goes way beyond." - Jatin Varma

‪"Without legs, I made footprints. I accepted change to build a new tomorrow." - Deepa Malik

Many Bollywood celebrities - like Rajat Kapoor, Nandita Das, and Kalki Koechlin - joined the cause and made their presence felt at this year's summit.

"The mentality of the culture needs to change. We need to focus on educating the boy child." - Kalki Koechlin

The hard-hitting talk of the day - which silenced the auditorium and had everyone's undivided attention - was delivered by Laxmi Agrawal, an acid attack survivor who spoke for the rights of acid attack victims. Laxmi is a TV host and Indian campaigner with Stop Acid Attacks.


The following women achievers were felicitated at the summit: