on April 20, 2015
I love commercial breaks. Unlike my wife and two children who have trouble sitting through them, I don't find ads boring or annoying. In fact some of the most creative ads get more eye balls than you can ever think of and often get talked about at social dos.

Remember the old yet classic Pepsi commercial starring Aamir Khan, Aishwarya Rai Bachchan, and Mahima Chaudhry. Directed by the leading Indian ad film director, Prahlad Kakkar, this ad took the nation by storm as everyone wanted to know who the blue-eyed, sassy Sanjana was. Aishwarya's punch line in the ad "Hi, I'm Sanjana, got another Pepsi?" caused a big stir, and the rest as they say is history.

In this blog post, I'll list the Top 5 ads that I can't get out of my head. 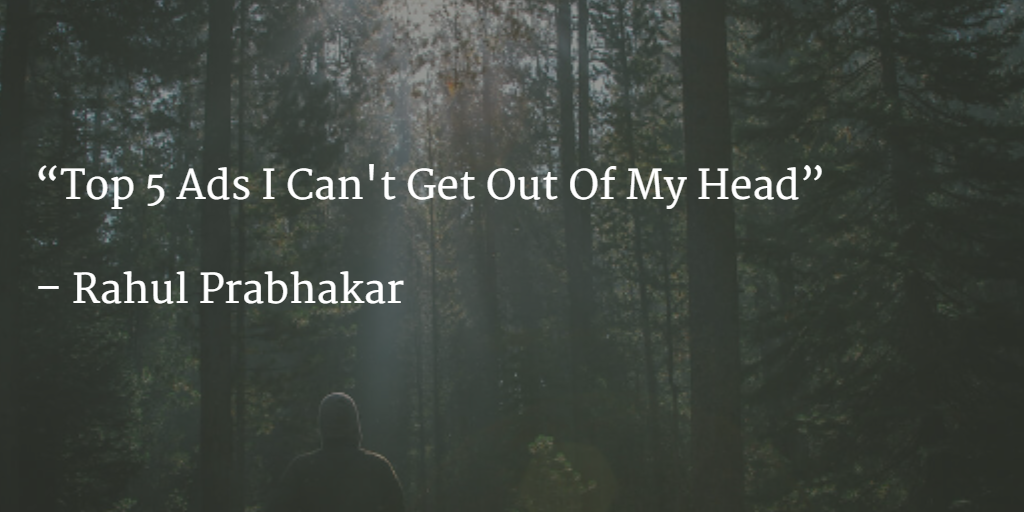 This ad is way beyond the eternal friendship between Baldev and Yusuf. If you've ever had a best friend from across the border whom you're no longer in touch with, this ad will bring back a deluge of memories and most likely, leave you teary-eyed.

The theme of partition, separation, and reunion hits home with both Indians and Pakistanis; the ad subtly conveys the universal message of love and friendship which resonates with all.

This video shows how a single person can lead from the front and fuel the urge to change. Much similar to the contemporary India. Everyone can be a catalyst towards new beginnings. The underlying message is: let us not continue to sit on top of issues.

Theme: A Wedding to Remember

This ad broke several stereotypes and was ahead of its times in many ways. It showed a beautiful, young Indian woman who is remarrying.

Every woman who wants to remarry can take a leaf out of her book and discover true happiness. The groom showed in this video approves of the lady's daughter from her first marriage, which to me is a reflection of great strength and character.

This ad is about inculcating good habits, and who knows this better than a mother, the best custodian in the world.

When I first saw the ad, the message that stayed with me was “equality”. A girl wanting to learn boxing, a sport dominated by men. But she is undeterred and trains hard, and all along the way, remains protected through the solid backing of her mother.

Theme: Dil jo keh raha hai suno (Listen to what the heart says)
This ad features my favorite actors Nimrat Kaur and Aamir Bashir engaged in a snow fight. It reminds me of how we stop looking at the little joys that life continues to offer. There isn't a better occasion to enjoy chocolate, a perfect mood lifter.

[I am joining in on all the Pepsi IPL action in my own style with the #CrashThePepsiIPL activity at BlogAdda.
This Pepsi IPL, it's not just about cricket. It's time to crash with your own created ad! Make your own Pepsi ad & if it's chosen, it could play on TV during Pepsi IPL! And hey, it doesn't end here… Even if you're chosen as a finalist, you stand a chance of winning a prize amount of Rs.1 lakh! So what are you waiting for guys?]
@BlogAdda #CrashThePepsiIPL Ads